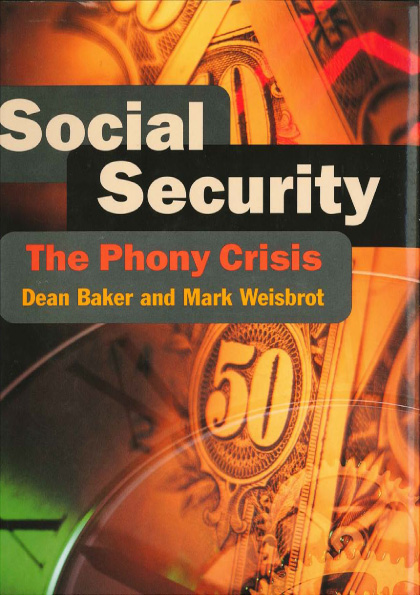 By Dean Baker and Mark Weisbrot

Is it true that the Social Security system is in serious trouble and must be repaired? As baby boomers begin to retire, will they inevitably, by force of their sheer numbers, bankrupt the system? Is Social Security a big Ponzi scheme that will leave future generations with little to show for their lifetime of contributions? Is the only way to solve the Social Security crisis through radical changes like privatization or bolstering it with massive new taxes?

According to the authors of this important new study, the answer to these questions is a resounding no. In Social Security: The Phony Crisis, economists Dean Baker and Mark Weisbrot argue that there is no economic, demographic, or actuarial basis for the widespread belief that the program needs to be fixed.

As the authors emphasize, there is virtually no disagreement about the facts of Social Security's finances, or even the projections for its future. Rather, the Social Security debate has been foundering on misconceptions, confusion, and lack of agreement on the meaning of crucial terms.

The authors also take on related issues: that privatization would help save Social Security, that America has a pressing need to increase its national savings, and that future generations will suffer from the costs—especially for health care—of supporting a growing elderly population.

As New York Times columnist Fred Brock recently wrote, "So-called reform of the Social Security system is looking more and more like a solution in search of a problem." In this accessible and insightful work, Baker and Weisbrot seek to cut through some of the myths and fallacies surrounding this crucial policy issue.

"Dean Baker and Mark Weisbrot have no trouble at all demonstrating that even on highly conservative assumptions about economic growth, the much-forecast insolvency of the Social Security system by about 2030 is most unlikely to happen then, if indeed ever."

"The authors challenge basic assumptions with vigor and intelligence. . . . An absolutely relevant and important analysis, presented with force and clarity, that asks, basically, what kind of a nation we really are."