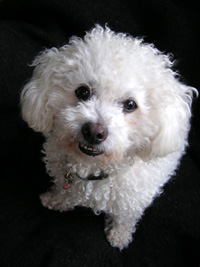 Biscuit is a 10-year old lapdog. He is retired from his career as an unwanted pet. Biscuit's former owner surrendered him to the Washington Humane Society due to economic hardship. He went to foster care and was adopted quickly. However, his new owner returned him half a year later because of health problems. Biscuit quickly settled into his old foster home and this time was determined to stay. He succeeded. His foster parents adopted him after failing to find a home for him. Biscuit graduated from the Washington Humane Society's Learning and Behavior Center with a degree in Well-Mannered Dog. He is currently in training for his Canine Good Citizen certificate and would love to become a therapy dog working in retirement homes. He lives in Washington, DC with Dean Baker, Helene, and his sister Olive. 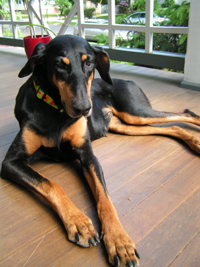 Olive has a big heart. Once upon a time her heart was filled with worms that had multiplied to such numbers that they were strangling it. After her owner died, Olive had been left tied up in a backyard of an abandoned house living off food scraps thrown over the fence by a kind neighbor and drinking rain water collected in dirty puddles. Winter set in and Doberman Pincher Rescue of Pennsylvania (www.dprpa.org) heard about little Olive and rescued her. After months of treatment for heartworm and a zoo of intestinal parasites, Olive was ready to fill her heart with love.

Dean adopted Olive on May Day in 2011, and she adopted him. It was love at first sight. Olive and Dean go running in Rock Creek Park, they write blog posts together, with Olive nosing the keyboard, and they discuss the economy. Grrrrr! Olive even goes to work with Dean time to time. One day, Olive hopes to be brave enough to accompany Dean to the Hill to testify about the need for strengthening the country’s anti-cruelty laws.