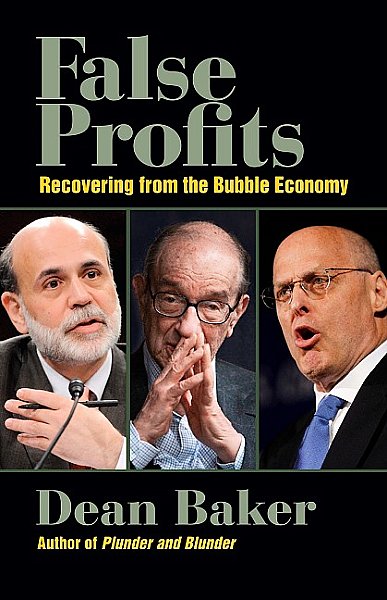 Despite reports that the recession may be over, the unemployment rate is more than ten percent and home foreclosures are at a record high. It’s no secret that the U.S. economy is in shambles because of the recent housing bubble. However, according to Dean Baker, Co-Director of the Center for Economic and Policy Research, the people who looked the other way as the eight trillion dollar housing bubble grew unchecked are trying to rewrite history by downplaying the impact of the bubble. In Baker’s new book, False Profits: Recovering from the Bubble Economy, he recounts the strategies used by the country’s top economic policymakers to keep the American public unaware of their failure to recognize the housing bubble and to take steps to rein it in before it grew to unprecedented levels, resulting in the loss of millions of jobs, homes, and the life savings for tens of millions of people

"What caused the Great Crisis? Who was responsible? How bad is it? What should we do now? In False Profits, Dean Baker blows away smokescreens and names the real culprits. Along the way, he hands up an indictment of economists – in government and academia – who for years could not see what was in front of their noses."

— James K. Galbraith, author of The Predator State: How Conservatives Abandoned the Free Market and Why Liberals Should Too

"Dean Baker’s False Profits is simply the best succinct explanation of the causes, cures, dynamics, and politics of the financial crisis – an indispensable book."

"Dean Baker has an incredible ability to simplify the complex and distill economic history into its most critical components. In False Profits, he squarely lays the blame for our current financial mess on the anemic leaderships of an elite group of men who remain unaccountable. After delivering this necessary dose of truth, Baker outlines practical solutions to achieve lasting future stability – solutions Washington should take seriously, before Wall Street is allowed to inhale many more trillions of our taxpayer dollars."

— Nomi Prins, author of It Takes a Pillage: Behind the Bailouts, Bonuses, and Backroom Deals from Washington to Wall Street

"Dean Baker warned us what was coming. Alas, the government and most economists ignored him. They denied that a housing bubble existed and would soon collapse with devastating consequences. Now we can read why Dean got it right when so many experts were blind. The story is intriguing – and deeply disturbing."